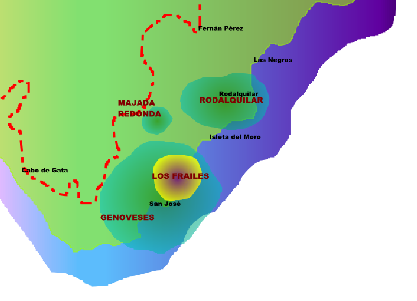 Our aim on these pages, presently embryonic, is to suggest the impact geology has rather than deliver scientific information but with some of both. Although the area is in one sense homogeneous it has interesting origins which have evolved much intricacy. At its most fascinating is along the coastal ways and the beaches where marine erosion reveals a multitude of minerals and evolutionary clues. The whole complex is a chunk of oceanic abyss displaced by plate migrations (see my Cosmic Myth). So not only does it have the fusion elements from deep sea volcanoes but also seismic crunches as it grounded up against the Spanish massif. Quite how much subsequent erosion there has been is not clear but many forms suggest submarine action. 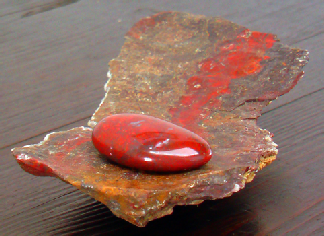 Parts of a jasper collection 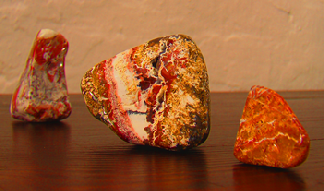 A fascinating feature here is the presence of fossil reefs, fossil beaches and fossil dunes visibly overlying vulcanism. Dunes are at Los Escullos, Rodalquilar Playazo,Cala Higuera and Playa de los Genoveses. At Playazo additional interest arises from the presence of lava bombs embedded in fossil sandbanks. A conventional reading for the Cerro de Cabo de Gata is a submarine volcanic plate with marine sedimentation, subsequent seismic events and aerial erosions. At best these lava bombs fell through shallow water into softened sand. They were certainly aerial in origin which seems to indicate vulcanism after the plate was elevated above sea level. Quite where the source might have been one cannot say, slightly west judging from the slant. At Los Escullos (which means ‘breakwaters’) there are fossil dunes but no obvious fossil beach above sea level. At Genoveses the fossil beach, containing evidence of marine fauna, is backed by fossil dunes & a fossil dune headland cap over basalts. 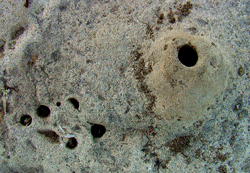 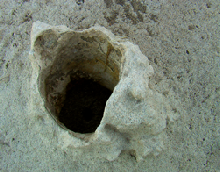 This sequence of images shows fossil evidence of fauna in a typical sandy sheltered beach. The top left image resembles very closely a razor clam’s breather holes. The 2nd & 3rd images are most likely those of worms. The bottom right hole is 6 cm across in the fossil beach, a large marine invertebrate that burrowed vertically into wet sand. The cap of Genoveses headland is said to be an oolithic dune but it is set on a volcanic base that extends westwards. 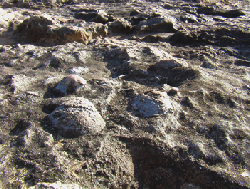 This detail of a fossil beach shows a tidal shell bank not significantly different in its molluscs from modern ones except that the shells are larger. There is one conch fossil, not exposd when these images were made.

These fossil dunes between Rodalquilar and Las Negras are enormous and if one allows for settlement and subsequent fossilisation would originally have been truly mountainous. Some appears to be sedimentary. More info needed! 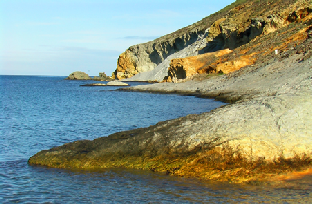 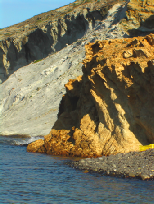 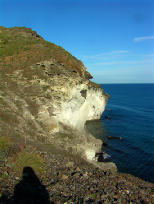 Minerals on Genoveses - ochres, bentonite, other clays and an area of talc on which walking is precarious. The 3rd image shows a typical mixture of hot pyroclast flows with fused material & eroded basalt residue topped by fossil dune. Pyroclasts, domes, magma & basalt dominate between here and the western massif. 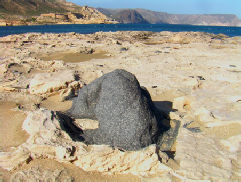 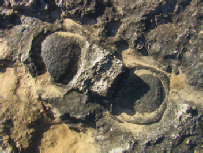 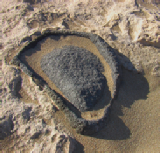 This sequence of images shows lava bombs that have plummeted molten into a soft beach. There is a little evidence of them in the dunes that back this zone which might suggest a time sequence if not a period. They vary in size but the really significant thing is that they lie in a beach that contains modern fossil shells. Their (semi)molten state is clearly indicated by the ‘egg splats’. 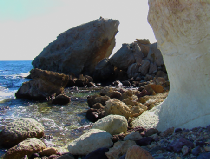 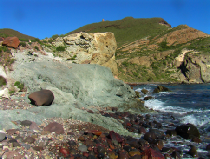 Cala Higuera belongs to the Fraile complex. It lies at the sea end of a long barranca and a rambla. It is of pyroclasts and white pumice cliffs that erode in chunks, the strange eau-de-nil coloured powdery outflow seen in many area of Fraile and tufa filled with volcanic glass fragments. Amongst the pebbles are interesting semi-precious quartzes.

For the present purposes of these pages the Cabo de Gata is best identified geologically as 3 distinct zones, though they blend. From east to west they would be Carboneras which is volcanic underlying limestones up to Las Negras; Rodalquilar caldera; Frailes complex caldera including Genoveses which is mainly lavas and abyssal pyroclasts. Possibly the most complex is the Frailes zone the two cones being upthrust through the andesite while still submarine. It includes the small caldera Majada Redonda. Genoveses I have taken for the time being as the focus of the western zone (map to follow!)

Probably the best places to see the geology without excavation (which is not allowed) are from the coastal paths and coves and the zone around Rodalquilar mines where minute quantities of gold were extracted, alum and sulphur along with small quantities of other minerals. The UNESCO museum there is the best source of information. 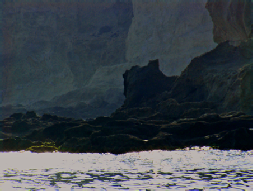 ◄These cliffs at Cala Carbon are volcanic dust interspersed with magma & granite layers, fossil dune whilst in the foreground the shelf is black lava, full of underwater funnels and small caves.

The zone of which Cala Carbon forms a part is mainly massive lava flows full of fumaroles and passages of which these kids give the scale, craggy and hard rock through which run large jasper dykes.

These images give the scale of the western zone that overlooks Cabo de Gata village. It is scrambling country and fairly uniform in its basic geology of magma flows. But there are areas that contain iron, lodestone, lead and other related minerals. It also has a very small remote remnant of temperate rainforest on one of the north facing steep slopes.

Many of the lower hills in the Fraile zone are volcanic cinder mounds in which fascinating varieties of quartz fragments can be found amongst the rubble. 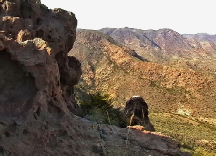 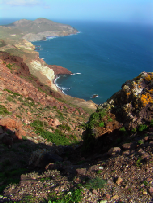 The rim of Genoveses is characterised by magma dykes extending radially into the caldera.

Erosion of conglomerate pyroclasts exposes what were once either treacly outflows or ‘smokers’. Scrambling country!

This dyke extends down to the sea where it forms an impenetrable barrier to walking the coastal shelf From it one can look over Calas Carbon and Monsul to Genoveses headland.

Note: these pages are written piecemeal under constant revision & extension! - work in progress.

These two maps attempt to show the main geomorphological features as seen. Their content needs more research than has been possible to this stage. One of the intriguing aspects of the quest is the intricacies in timescale of dynamic events between the emergence of the oceanic igneous plate and later geological times. For the author this is an ongoing thing so nothing here is in any way finite, only a start! One thing is certain though; the intricate ecology of the Cabo de Gata park arises as much from variations in chemistry as to its numerous microclimates induced by topography.

This mass of porphyritic rock is to be found near Las Negras at the base of a limestone formation. Photography doesn’t do justice to the range of colour found in it nor the infinite opportunity for inspiring abstract painting! ►

Panorama of the caldera Majada Redonda 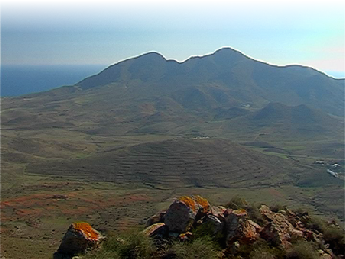 Face each other across a wide hilly valley. Here they are viewed from another peak.►▼

◄▲ A stiff steep scramble brings one to the rim of Majada Redonda. The slopes are a mixture of scree, palmetto thickets and tumbled volcanic boulders. The rim itself has fields of eroded volcanic debris interspersed with gnarled crags of solidified heat fused oozes of one sort or another, mainly granite. Amongst the latter are many small meadows filled with flowers much enjoyed by butterflies ‘topping’ in late spring as the temperatures rise in lower zones. The reason for this flowering in spite of its exposure and altitude is the prevalence of hilltop fogs at all times of the year. Sometimes they enforce descent!

The area between Agua Amarga and Carboneras is largely limestone reefs which overlay lava and granite flows, prominent in coastal zones. Carboneras itself, an attractive and popular resort, lies in an alluvial basin beyond which is the eastern mass of vulcanism and limestones.

A visit to the UNESCO geology museum throws some doubt on calling Genoveses a caldera. Frailes is not immediately recognisable as a caldera. But more detailed exploration is revealing. The two cones are resurgence volcanoes. The UNESCO display is skilful, professional and excellently informative. 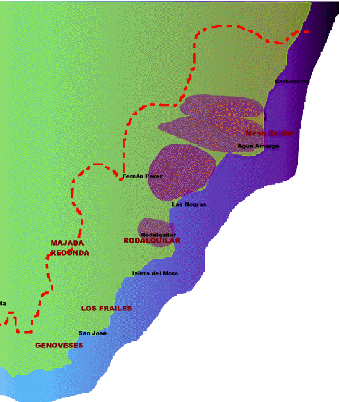 Note: in these areas the rocks overlie vulcanism and seem mainly reef  and marine dunesand in origin. Reefs always develop on the lee face of the volcanic outcrops.

The following link gives information on the theoretical political status of the natural park: www2.unesco.org/mab/br/brdir/directory/biores 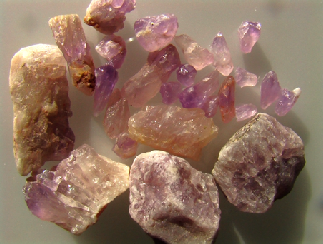 Collecting mineral pebbles here is a quiet pastime followed by many. Only certain coves produce semi precious stones but those that do reward searches with rich variety. The amethysts (right) were part of a shared collection amassed in an hour. The jaspers were polished. 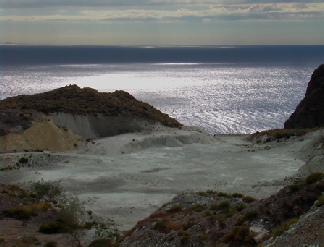 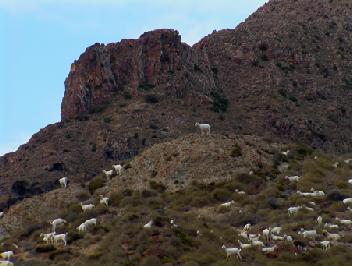 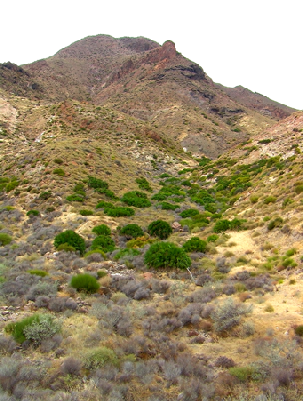 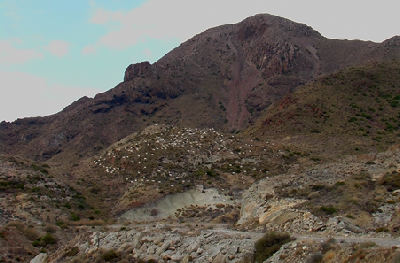 The seaward side of El Fraile, the south east, has precipitate slopes, ravines and chasms that plunge into the sea in a tumult of geological emissions, hard and soft. Steep coves result. Apparently it has good grazing for goats, since flocks are regularly visible on these slopes. Only two years ago the goatherds walked with the flock but these days they sit in vans watching and send waiting dog(s) out to keep it under control when necessary. The goats seem to follow pre-arranged routes known to the lead animals. At least that is what observation leads one to think!