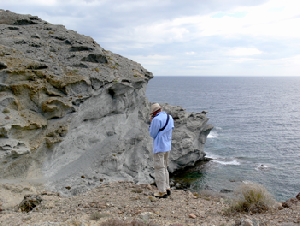 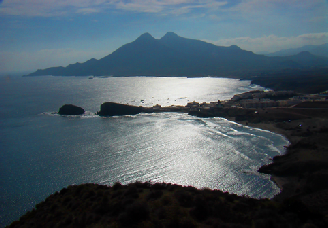 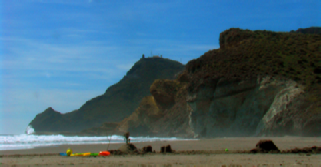 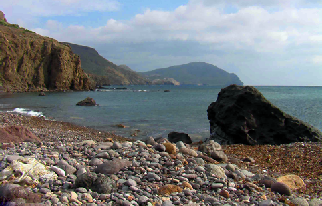 Sandy bays occur mostly where calderas in the older geology have been inundated and eroded by sea, always popular on fine weekends. Several offer comfortable swimming most of the year. Between them  is a multitude of delightful small coves, some more accessible than others.
La Isleta del Moro & Los Frailes
Media Luna
Cala de los Toros
Most beaches are ‘go as you please’. San José & Genoveses are strictly textile. One needs to take care in stony coves to avoid urchin and rockfish spines. They are painful, even dangerous. All beaches are of interest to snorkel in the mostly clear water. 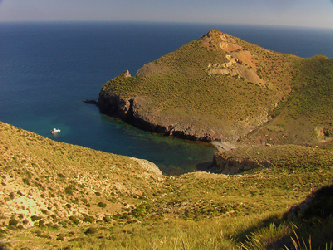 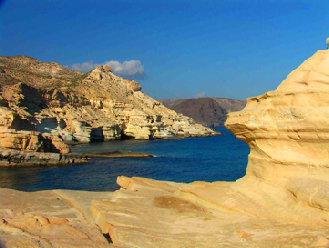 Cala del Bergantin
These three coves are near Rodalquilar’s Playa Playazo. Top left is in huge fossil dunes around the San Roman fort, a jealously guarded private territory with increasingly limited access. Cala del Bergantin above is reached by a steep walk from Playazo or a more strenuous but interesting one via La Polacra. The small cove between Playazo and Castillo de San Ramon (left) is a popular normally quiet sun and swim spot.
Castillo de San Ramon 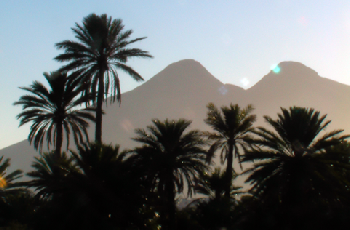 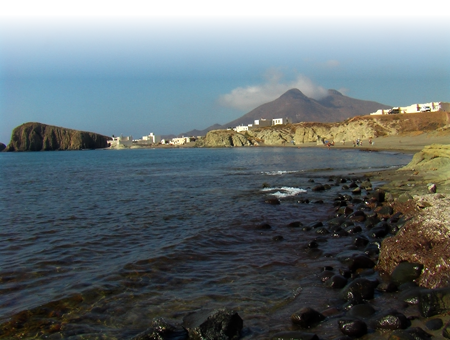 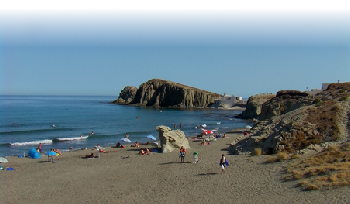 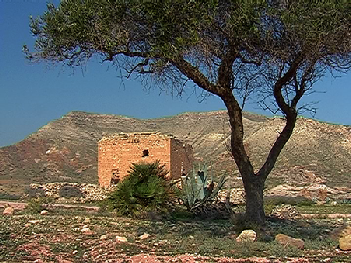 January’s light is special - anda luz - intense but so hazed that scenery takes on a more pastel colouration than at other times. A dreamlike quality prevails, for old fields become filled with the sulphurous flowers of wild sorrel in a mist of  asphodel white. Then, just a few weeks later the mood changes dramatically when wild barley grass bronzes the fields in a way quite different from the sere hues of summer.

Surely no European coastline is more fascinating, more dramatic and more lovely than this small, compact topography between Cabo de Gata and Carboneras. Many equal it perhaps but no other is quite like it. None share such anomalous characteristics compressed into an intensity that just two or three days walking can generate - that is if you feel you can walk in that energetic way through so much fascination. Far far better to divert from the main path, to explore and swim in its coves. 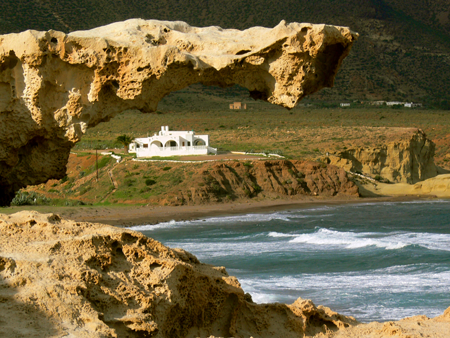 Cabo de Gata, San José, Escullos, Isleta del Moro, Las Negras (not Cala Negra), Agua Amarga, Carboneras have restaurants and cafés in their vicinity most of the year. In high season a cafetería is erected at Playazo. The other coves remain secluded for now but the ayuntamiento of Níjar has intimated not entirely popular intentions to ‘develop’ them. At Cabo de Gata, Cala del Cuerva & Los Escullos there are all year campsites with cafeterias. San José’s ‘Camping Tao’ is very popular but seasonal. 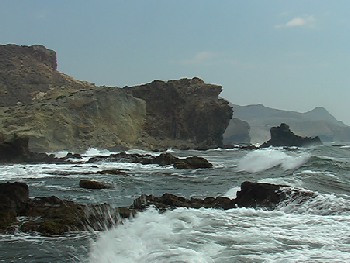 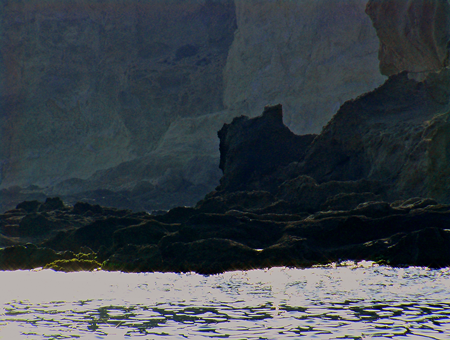 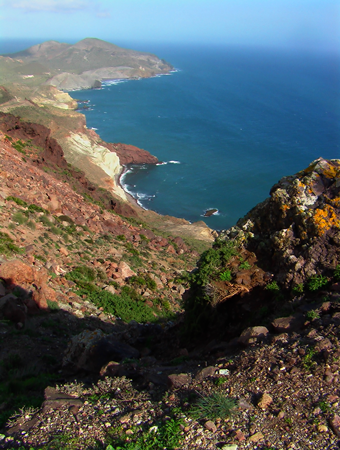 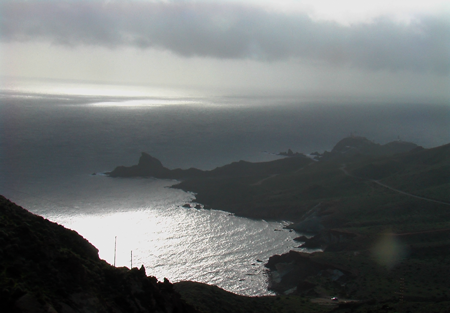 This volcanic complex is older than Los Frailes with enormous lava flows and jasper dykes all deriving from abyssal vulcanism. It results in a spectacularly rugged coastline some of which is accessible at sea level on foot some not.

Cala Carbon in a levante

The western coast from Cala Carbon to Genovese head 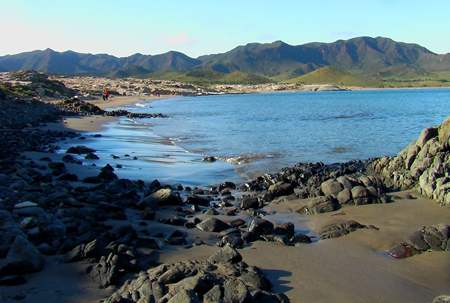 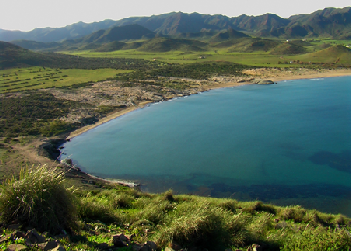 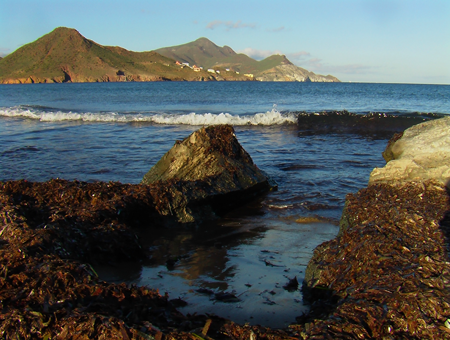 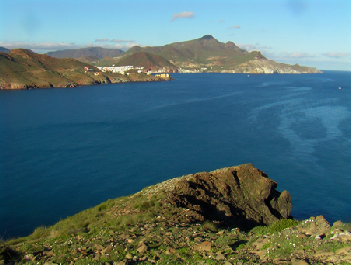 Apart from San José town beach by far the most popular beach in the western sector of The Cape is Genoveses with its wide sandy bay and clear sheltered water (except in a levante wind when it is used for sailboarding). There are spectacular surroundings and a large car park for out of season use. In season free park & ride is available.

Due to its extreme exposure to levante storms and its geological complexity, the Fraile coast is very rugged. Levante winds here have the longest wave carry and so produce large breakers over reefs and shoals but not really for surfing! 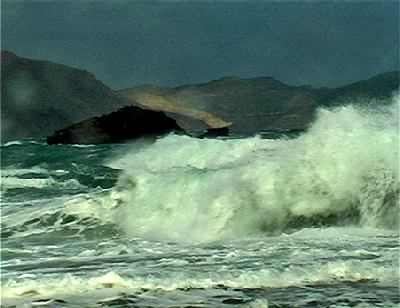 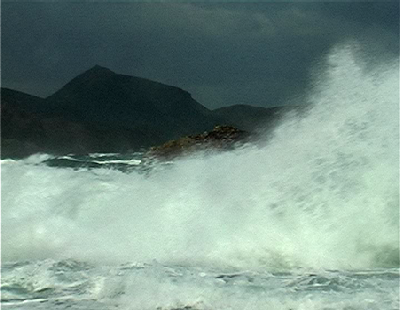 On any south-east facing coast sunrise and moonrise can be awe-inspiring (should I use the Americanism ‘awesome’?). From these coves and beaches moonrise in particular has peaceful sublimity (providing you can avoid or tolerate mosquitos). 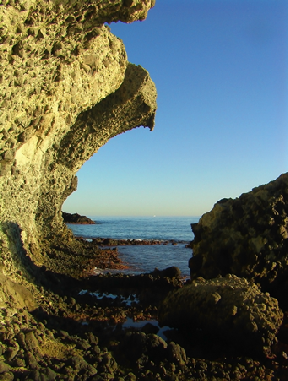 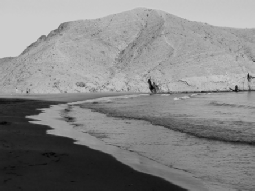 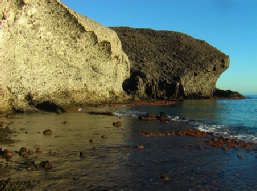 One of the more remote sandy beaches Media Luna (half-moon bay) is ideal for a quiet day out of season. Rambling from it is also interesting when you are bored with sand and sea. Interesting geologically, it marks the western end of the vulcanism of El Barronal with its pyroclast cornices of which Playa Monsul is part and a transition to the andesitic outpourings of the Western Massif. 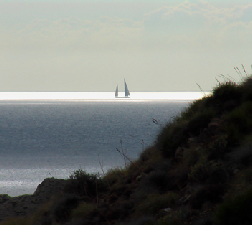 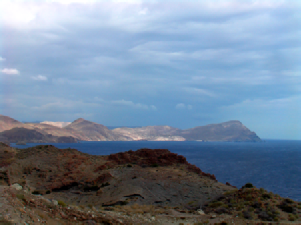 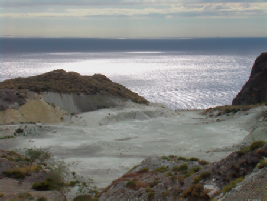 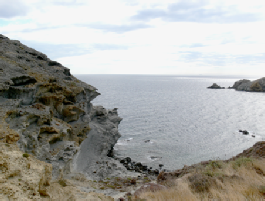 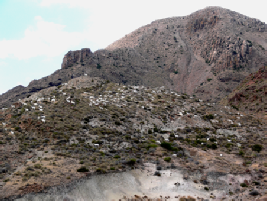 The author in characteristic pose

Part of the spectacle from the track to San José

Spectacular cornice erosions of the pyroclasts