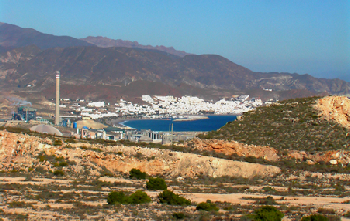 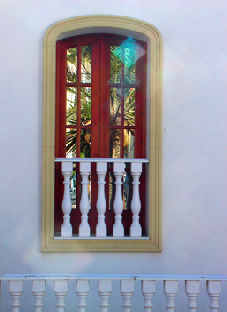 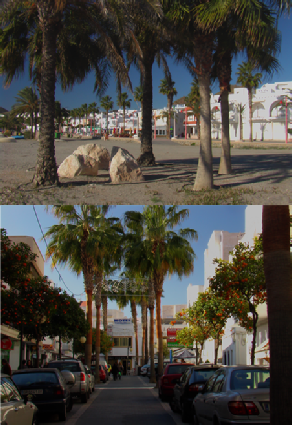 Pages to continue our exploration of the many-facetted coastal landscapes of the Parque Natural Cabo de Gata, beginning with the grand mountainous strip known as Baronal. I read that this name means ‘barrier’ and indeed the steep volcanic crater rim topography that rises out of the Genoveses plain and plunges precipitately into the Mediterranean on its southern aspect can be construed as a barrier, both to the natural elements of wind and sea and to human passage to the secluded beaches below. 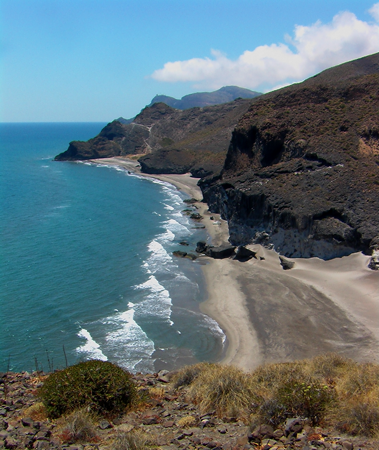 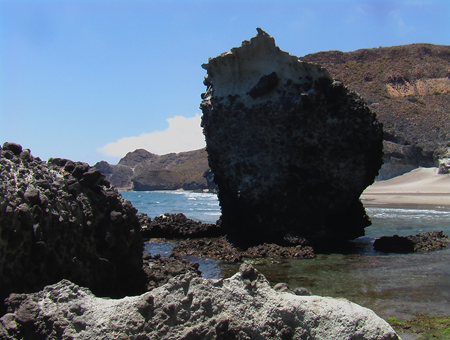 One sees from above and from the shore that this scenery results from slow coastal erosion of a resistant geology. It collapses in large pieces of very solid material, the volcanic conglomerates that in terrestrial conditions would have been pyroclasts. One might not wish to be standing belowsuch an event! It then takes the sea an eternity to break them down further yet most of the sand on these beaches and in its dunes is mineral in origin, very little of it shellsand. Granitic lumps embedded in tufa results in craggy rocks where otherwise there might be nothing but cliff cornices for drama - enough you might think. These are popular naturist beaches and deservedly so, for the sea is clear with a 30 metre lagoon near the shore protected by a backwash sandbank over which the waves break in small rollers. In windy winter conditions waves are pushed up the beach to crash against the impenetrable barrier of the corniced cliffs but as the image above shows it is possible to scramble up the valley undulations if one can reach them! As well as the long beaches there are several coves also reached via rough cliff paths where one can swim in safety and usually peacefully. All of these are situated between Genoveses and Monsul beaches but be prepared for some roughish gorgeous walking! 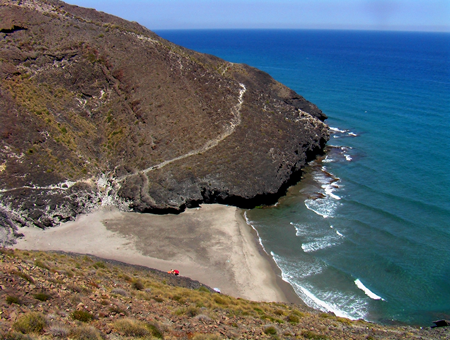 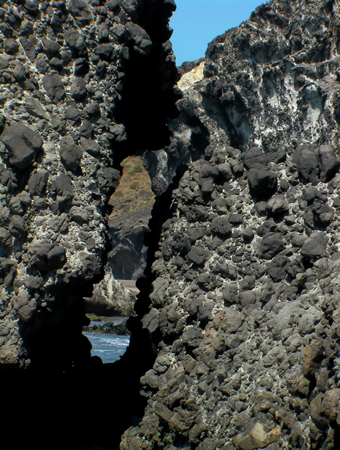 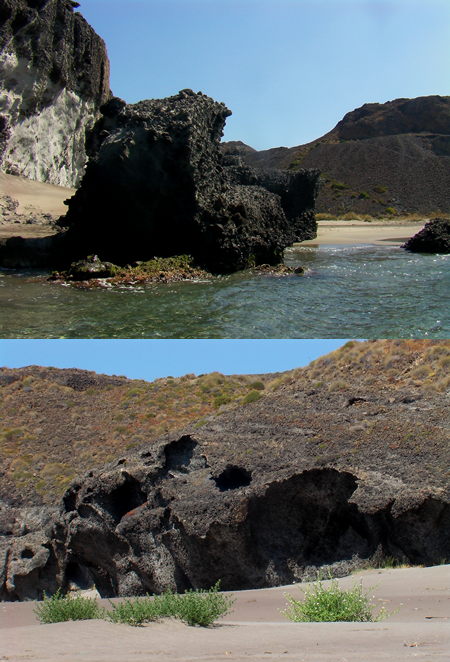 Very fine sand here is a pleasure to walk over barefoot when wet and readily forms dunes in the valleys of the undulations. In summer it becomes very hot because the beaches are exposed only to south winds. But these are favourite places for couples to spend the day and night. When it is at its hottest there is always some shade to be found in the crags under the cornices and one can alternate the indolence of this with plunges to pass summer days in various kinds of discourse, walking the sea’s edge or ...

More to come in Geology

Pyroclastic flows prove a malleable medium for nature to sculpt

Carboneras is the large fishing village or small town easternmost on the cape. It has an industrial base and a small fishing fleet but is also an attractive and popular resort. Much has been done in recent years to make it more so. It esplanade and holiday beach are fine and sheltered and lined with palm trees, all very convenient to restaurants, cafes and shops. It makes a pleasant day out and its outdoor market on Thursdays is best for fresh produce. There are also the usual rag trade and knick-knack stalls 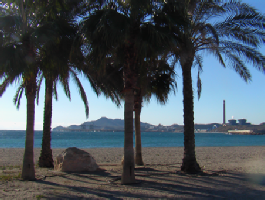 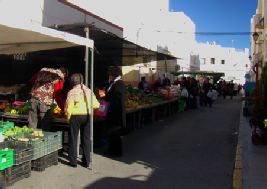 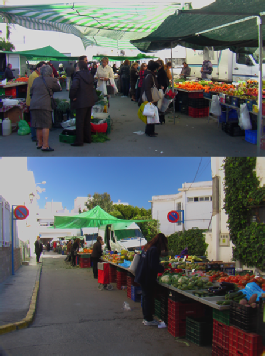 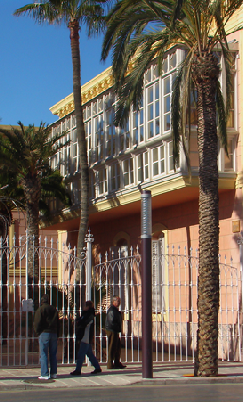 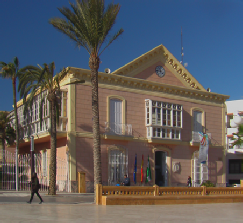 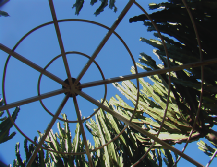 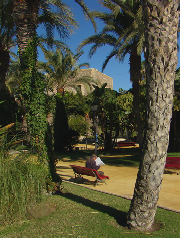 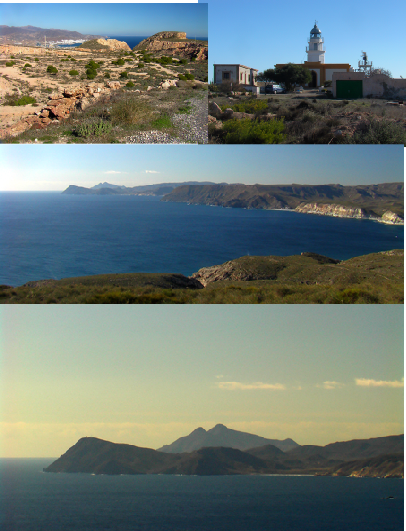 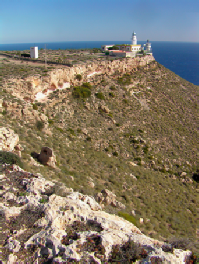 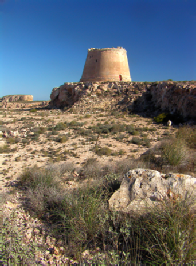 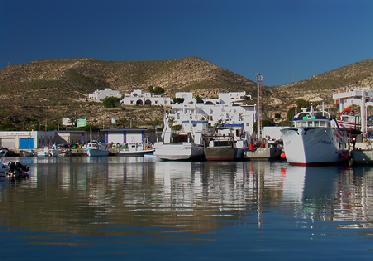 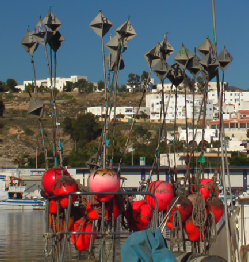 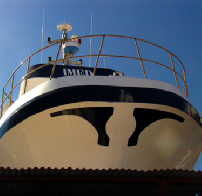 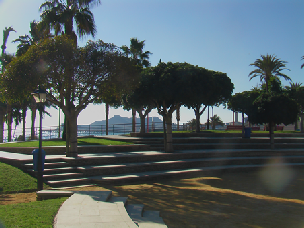 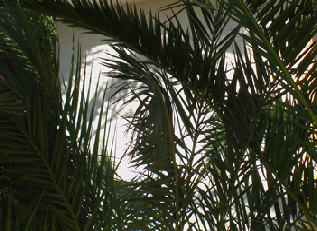 ◄ BACK TO COAST

A short walk along the esplanade leads to the town harbour which hosts a boat repair yard and combines leisure and fishing boat moorings. Here the Andalucía government keeps one of its marine environment patrol boats, bristling with electronics, that one often sees passing by from beaches. Fish is unloaded here to the fish market on the quayside and the huge sea wall is lined with gear storage facilities. There is an industrial harbour to the west for water and lime carrying vessels.

It is possible to walk to Mesa Roldan (Orlando’s Table) via La Playa de los Muertos but it is a good hike. From its summit the panorama of the Cabo de Gata eastern sector from Agua Amarga to El Fraile is unsurpassable on a clear day. It is also possible to drive there out of season. In season Playa de los Muertos is an environmental joke. In succession here La Negra, Polacra and Los Frailes headlands.

The lighthouse is a major communication centre

The cap was once a lime quarry

Geologically Mesa Roldan is a very large fossil coral reef sitting on top of and in the lee of a volcanic mound from whose southern face it streams inland (above).

Right: La Polacra, a prominent headland at Rodalquilar has a defensive tower from the XVII century, a lighthouse and is also a coastal communications centre. 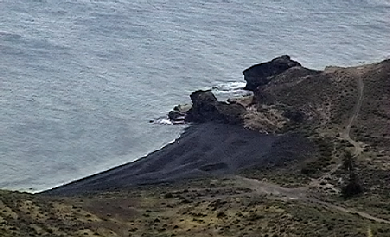 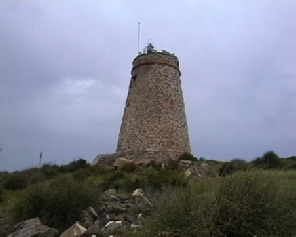 On the apex of La Polacra is a 17th century watch tower and at it feet the black boulder cove of Los Garnejos, the garnets with lava extrusions and fossil dunes here seen in mid winter

This cove at the foot of La Polacra is interesting for several reasons. Reputedly it has the so-called ‘black diamonds’ - garnets, but not easy to find. It is the only cove on the cape to consist entirely (almost) of black lava boulders and pebbles. But as this photograph shows, it also has an undulating form familiar to many from Atlantic storm beaches in such places as Orkney. Though it faces south, its corner position under cliffs obviously raises wave energy. One frequently finds the remains of inflatables half buried, signs of invasion. The watch tower would be a landmark visible from several kilometres out.