The Ria de Alvor on the south coast of the Algarve of Portugal is a protected wetland facing similar threats to those of Cabo de Gata. A new urban owner of the land wants to develop it for ‘eco-tourism’ (& a golf course) and the French conservation charity A Rocha is involved in attenuated legal battles to defend its protected status against machinations to evade that status.

As in Galicia ‘rias’ are broad estuarine creeks, large inlets from the sea coast, Abers in Wales & Brittany. Ria de Alvor is surrounded by limestone outcrops with a large once- traditional estate, Quinta da Rocha, occupying much of it. Like Cabo de Gata it contains saltings. Here the coast is subject to voluminous Atlantic tides which fill and empty its lagoons with a richly varied animate ecology. It is now one of the few relict resorts for migrant flamingos (amongst other species) in Portugal. These pages are a mainly visual personal homage to a special place.

On the south western shores of Ynys Môn, (Môn mâm Cymru) Avon Crugyll drains farms on a low peneplaned hinterland, with lush banks meandering first through gorse common then behind high sanddunes through bare salt marsh. Its tang, taste, feel, bleakness and bird calls are so embedded in memory, even in those days tinged with nostalgia, that they can be recalled in an instant. My bedroom from late childhood on looked out directly over that bleak wildness. At its small narrow window set in a thick stone wall, open to the evening air, I would sit chin on knees on its wide sill when my parents took quiet ‘family free’ walks, watching their still young figures cross the little footbridge over the river, vanish into the peace of hilly dunes with thyme-fragrant orchid-speckled slacks beyond, awaiting their return. The plaints of redshanks and sandpipers here in Ria de Alvor awaken vivid images of that return in late dusk disturbing the marsh birds. Once they were over the ramshackle bridge I would slide back into bed, listen for the door opening then closing, subdued murmurs so as not to awaken the four of us, the signal to fall asleep to the melancholic redshank serenade punctuated occasionally by oyster catchers and pectoral sandpipers. The late Irish Mail train had time since traversed the long embankment parting gorse from marsh, thundering across its metal bridge over the river, its acrid trail of coal smoke and steam dispersed. Here in Alvor small local diesel trains rush by between marsh and farms, rumble the viaduct similarly. Discovering late in life, such a vividly familiar kind of place collides rather differing pleasures, the re-exploration of an ecology and a nostalgia so deep it cannot be permitted to surface. Not even Proust could match this one!

The attenuated catenary of experience suspended between these two episodes blurs, fades into insignificance, serves only to tinge the new experience with the old when I pause here on this path.This river is wider, deeper, its tidal estuary of mobile sand flats beyond the low sea wall more extensively open. Aber Crugyll meandered naturally through a dune gorge to wilder seas that pressed it close to the shore of a broad sandy bay between rocky arms, exposed to south westerlies. Ria de Alvor, doubly protected by walls and low dunes, fills and empties through a mole-lined exit from deep Atlantic tides. The inner marsh is fed and drained through a narrow culvert where mullet and trout pass in and out of the lagoons and crayfish lurk. A quiet place this where people cockle on mud flats, seek venus clams at low tide or fish when tides are full, where the crashing of Atlantic breakers on the long beaches of Meia Praia and Praia de Alvor is softened by distance, held at arms’ length by those low dune barriers. But it is the same deep muffled roar heard in that space-time-distant bedroom.

Behind though, the land here is totally different, far far less windswept, farms with orchards where apricots and pomegranate flowers glow in rich foliage, farms converted into villas nestling in deep groves of apricot, fig and medlar. In that childhood home a tree was a miracle if it reached the height of an adolescent child and apricots came in tins in ‘family food parcels’ from Australia. In these groves of Ria de Alvor orioles call melodiously, but rarely, fleetingly vouchsafe the gift of green and glowing gold flashing past; over them bee eaters chirrup, gleaming cyan and burnished bronze as they twist in the sunlight, swooping from their perches on the wild orange trees to hawk huge dark carpenter bees. On Maytime mornings massed flights of swallows, martins and swifts perform their bewildering speed ballet feeding frenzies over lagoons or grassland, cattle egrets sail over ‘shy’ stilts incessantly protesting my presence - even more that of my dog companion (for whom they hold no fascination) - reaching an agonisingly frenzied combination of noise and threat-flying if one passes nearby seemingly unperturbed chicks. Sometimes common tern fish the tide over the inlets; little tern occasionally nest, if that is an appropriate term for tern habits, on the shallow sands of lagoons where whimbrels lament. Last year one sick flamingo lingered long after the general exodus. This year, after an unusually wet winter inundated the inner sand flats there are neither flamingos nor little terns there, though the latter occasionally pass, fishing where the tide’s cockle white edges define sandbanks. And, yes, redshanks are here; the same plaintive nostalgia seeps out of memory, dredging deeper memories, unbearable longings masked within the strange palimpsest unlocked by this southern experience. 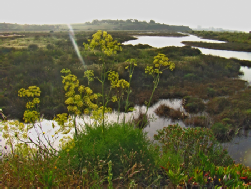 Below part of the Quinta da Rocha bought by an urban entrepreneur apparently with little knowledge of and no love for either local tradition or conservation law in a legally protected environment, seeing only BIG EUROS not Eros lining those clouds. 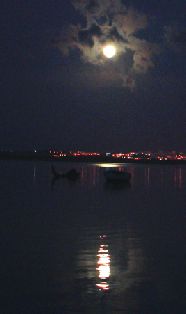 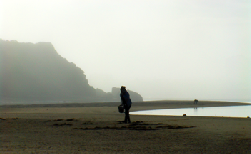 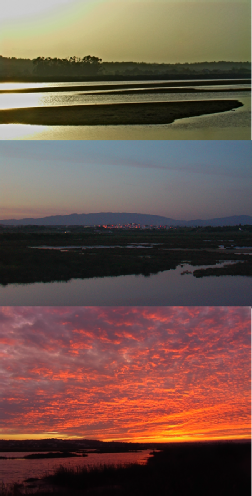 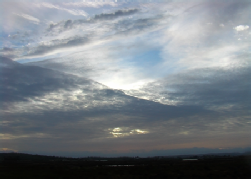 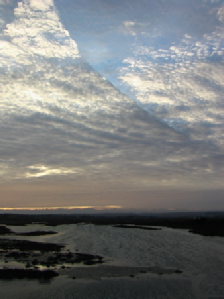 It occurs to me how different is the approach in Cabo de Gata. Most of that coastal strip is owned by one family (Montoya-Diaz, 3000 Ha) who go to enormous lengths on their land to practice thoughtful conservation techniques in both herding and cultivation but are also engaged in tourism. It is a exemplary landownership of a statutory protected environment in which they sometimes find themselves in opposition to the authorities who wish to see it ‘developed’. How ironical this reversal is compared with Ria de Alvor! This was probably the way of the previous landowners of Quinta da Rocha.