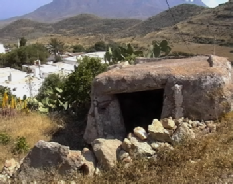 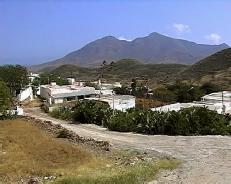 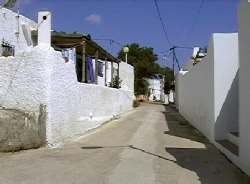 Anywhere other than here perhaps Presillas Bajas would have been conserved as an architectural treasure. It is excluded from the Natural Park controls - not that that makes much difference, so is Las Negras. It is now inhabited almost exclusively by incomers. Whilst some of its houses have been carefully, even lovingly converted, manipulation of systems of control has enabled the incursion of aggrandisement to allow holiday home letting. As a result the original harmony of the village is steadily disrupted. Any architect worth their salt can create a modern home within the traditions without resorting to architectural types better suited to holiday homes in Brittany or, more locally Toyo. The topmost layer of images shows a typical mountain village for the area and also some well preserved buildings or ones with appropriate additions. Literlally translated the name means Lower Little Buttons. There is a Presillas Altas (Upper Presillas) 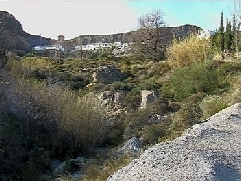 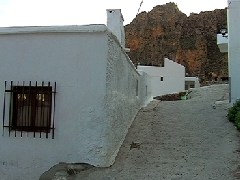 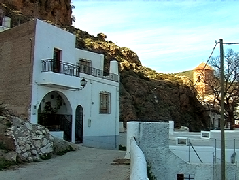 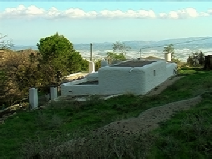 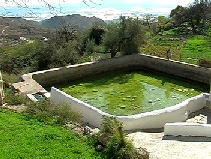 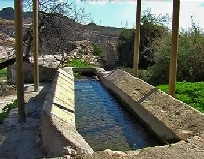 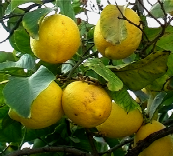 This village, in the Cerro Alhamilla above Níjar, is outside my declared area but is a true mountain village. Some houses still have characteristic form & detail.

The two houses in the 3 images above are as near as you can get to a vernacular type for the area. Compact, functional forms reflect origins of the Mudejar style in earth structures. Their proportions reveal (indirect) input by masons (a ‘way’). These have been carefully conserved and maintained so the rounded caps & corners are more satisfying than modern ‘edgy’ concrete pastiche.

In Huebro the reservoir stores water from a clear abundant spring, a genuine fuente cilla. This is celebrated on a memorial plaque. It seems also to have functioned as a bathing pool. The wash trough is fed from the same spring but independently with fast running clear water.

Almond and fruit orchards characterise the in-fields of Huebro. The lemons are of a superb quality and flavour I am told (I am allergic to them). Certainly they smell good and lemony. 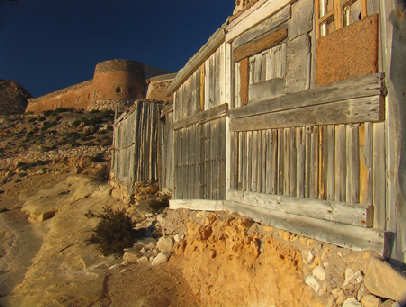 ◄ The old fishermens’ huts at San Roman (Playazo de Rodalquilar) with their ad-hoc assembly of planks and pitta stems are a lively contrast with the official stereotype fortaleza developed by the state to defend these remote coasts. These forts however do not differ significantly in their construction from the traditional cortijos, only in their mass - and form of course. The huts withstand Mediterranean storms quite well but one suspects that the chipboard repairs might not!

The fishermen’s huts have been demolished this year (2010) and appear to be in process of replacement by a mundane concrete cube in the car park area where the iris field was (see Flowers). Presumably this is intended to privatise the foreshore of the fortaleza which has been a popular shore fishing position.

All the villages in the Cape were originally hamlets, even Níjar and Carboneras, always fringe. Their layout as a result doesn’t reflect much of the true Berber style one sees in the more substantial villages of Las Alpujarras. In those villages one finds microcosms of Berber town planning, houses arranged in the closest possible proximity in an only apparently anarchical way. This had a cardinal virtue of spatial efficiency where small poorer houses could fit interstices and access ways reduced to the minimum necessary for movement of people and beasts maximising productive land. This was a ‘way’ reached through history via localised social leaders and not mere expediency. The method was used for residential groups even in cities. These hamlets of the Cape have occasional minute tight nuclei but are less compressed probably because the land was less productive with resulting small populations. It was suggested to me whilst visiting Alpujarras that traditional methods of construction there were due to poverty. In fact they are more likely ‘received’ methods within an ecologically based agrarian culture that had reached higher standards than elsewhere in Medieval Europe. These ways would be retained due to ease of self-maintenance and availability of abundant adequate natural materials. A true vernacular. The Alpujarra structures are significantly more substantial than those of the Cape.

In the 1980’s I undertook a study tour of Andalucía to research Berber methods of urban layout at different scales especially the relationship of symbolic to functional space. This focused on the region around Granada, Cordoba and Ronda. As well as military and symbolic planning of palaces and their integrated landscaping I observed that residential districts, once each zone was established by ordinance, reflected wide internal social diversity with a precise pattern language. That density reflected social needs but hampered intervention during apparently frequent riots. This was solved by making each ordained zone capable of being physically sealed off so that disturbance could be contained. My comment on villages is offered in the light of that study though in general a hamlet of peasant farmers or fishers has less social complexity and is unlikely to revolt or need containment! Just shouting matches or the occasional crime passionel! The status of fishers in that culture is clearly visible in some archaeological sites on the Portuguese Algarve coast, a Berber fringe, where they appear to have been the poorest of the poor living in almost Bronze Age conditions. There is also evidence in the Christian New Testament for the status of this particular group.