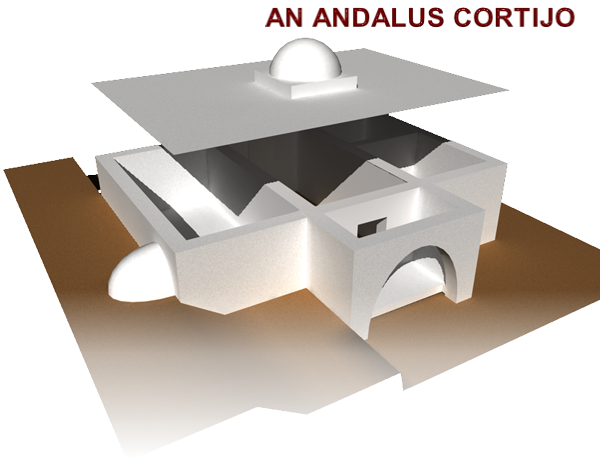 Fuentecilla is typically disposed within its land; central, built in a place less suited to agriculture but placed & oriented ideally for climate, set into the slope. From it nearly all its land is visible. Basic components are the farmhouse (a permanent structure), an era (the threshing and winnowing  floor), a spring (unusual), a well or pozo (many cortijos have an aljibe (below)) & sundry temporary shelters/stores.

Throughout this area stone is plentiful, wood much less so until the Alpujarra. Walls are therefore built with local granitic field stone which holds together quite well because its texture makes it ‘sticky’. Generally 0.5+ metres thick, they are bonded with lime mortar or adobe, rarely gypsum and then faced with lime coated slurry outside, sometimes gypsum or adobe inside. The mistake of many ‘improvers’ here is to use strong cement mortar outside which cracks and allows water penetration into the soft core. 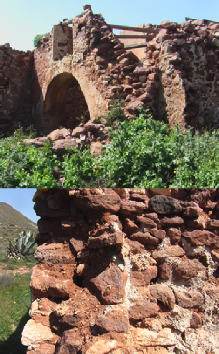 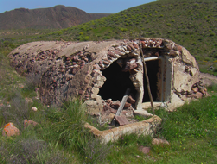 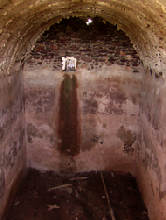 Aljibe is a Mudéjar name for cistern. They collected run-off and ground water mainly for irrigation and general use, not necessarily for human drinkwater. They sometimes had a small hand hoist ‘pozo’ to haul water up to a trough (on its left above)..

Left 2 images show basic wall construction as revealed by ruin. Once water penetrates these walls they quickly collapse. Also they are without foundations.

Left above is the ‘era’ of La Fuentecilla. This is a threshing and winnowing floor paved with granite setts. Here the radial pattern is visible. A donkey or mule would drag a contraption over the harvested grain and the winnowing would be done usually in the evening using either adiabatic or catabatic winds. The size of an era is a fair indication of the productivity potential of a farm. They were also used for olive crushing apparently (in Cazorla).

The image left shows a mountain cortijo near Huebro (Níjar) that has some outbuildings and no portico but a well placed earthen floored era - the circular platform - on a bluff in the ravine to catch summer winds. The basic form is clear, compact and rectilinear. It is surrounded by many terraced fields but would have been too small to own them all; many would have belonged to the village of Huebro.

External baking oven that has lost its adobe coat 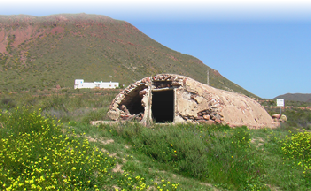 ▲ Farms everywhere are readily characterised as prototype industrial units in that they are based functionally on organised sequential production processes. 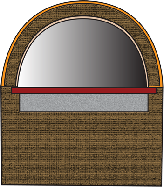 The construction of domestic baking ovens is varied. Gil Albarracin in his typology gives this one for Níjar. It perhaps explains why the one in my photo is in such a ruinous state. Advantages were that it could be reconstructed easily since the stones are arranged in layers in the manner of an ancient tholos gradually leaning up towards the crown, not as Albarracin shows in his examples. Albarracin’s typology shows many variants. That in my example is very rustic! & reflects the general construction of these houses hereabouts.

Sometimes a baking oven was attached to a service area in a cortijo as in my type at the top, sometimes detached as in the photos. Attached, its usefulness was also as winter heating.

This image shows how the aljibe is positioned to intercept water from a rambla running off the mountain behind. Water poured in through the aperture in the interior image. Some aljibes are many times this size. Some farms had norias.

References here to Gil Albarracin are to his book Arquitectura y technologia popular en Almería, Almería 1992. This translates as Vernacular architecture and technology in Almería (province).

This aljibe has had its traditional roof repaired with concrete and no longer collects water.

25 years ago Cortijo el Capitano (the ruins in these photographs) was a busy stock rearing farm. Ruination follows quickly once regular maintenance ceases on this traditional construction. It then consisted of a small living quarters on the west side. All the other buildings were for stock, far more extensive than Fuentecilla which seems to have been mainly produce farming due to abunadant water and limited animal stock.

An antique Byzantine manuscript makes the following, perhaps obvious statement: ‘For what is made with craftsmanship is done more quickly and as it should be, and lasts in time. For a thing achieved by craft is done more quickly and more safely’ (Strategikon, 6th century). Specialist craftsmen can be supported only within wealthy communities. For centuries Andalucía was a poor province, this particular corner the poorest of the poor. So whilst cortijos here show aspects of an inherited tradition, a ‘WAY’ the building of them was expedient, the antithesis of that Byzantine recommendation, therefore not durable. However, with careful maintenance of the shell, in particular its lime coatings, roof surfaces and wall cappings, none of them requiring great craft skill, they can last several generations. But the application of modern finishes and materials is incompatible with the basic construction and causes damage to the ‘soft’ wall structures in particular. No matter how stout the core of stone without repeated resurfacing the structure fails because the lime or adobe bonding washes out or disintegrates with persistent water penetration. The domestic buildings of the Alpujarras, a core area of Mudejar Spain, are far more substantial since it was much wealthier within the Islamic agricultural tradition.

Roofs here were made from just one or two solid timber beams - always very expensive - if spans made it necessary, supporting intermediate agave stem rafters. Over this was laid a raft or mat of adobe mixed with esparto or straw, perhaps in several layers. Lime was added to the adobe and straw mix for the top layer perhaps using a special clay in the adobe and also mixed with lime to surface it. It leaked frequently after a time, probably each year, but was easily repaired using the same clay and lime. Once cement based materials are used over this they crack and craze. Water then seeps into the now inaccessible base and saturates it causing leaks and eventually collapse through softening of the straw or esparto bonding. The contemporary problem with maintenance seems to be that the people able to repair the original materials become unavailable and ‘modern’ builders always know ‘better’!

Friends have asked me about the Andalus cortijo. It is a type of farmhouse based on Mudéjar vernacular architecture. They were perhaps originally not generally self-built but contstructed by journeyman masons. This is evident from proportional systems often used for main rooms. Cross sections tend to 4:3 (Golden mean), the length 2:1. Though Gil-Albarracin discusses them extensively he wisely attempts no typology. Plans vary according to needs but share a similar core. Openings are small due to the wall construction  and excess sunlight for much of the year. Wood is expensive and its use limited. 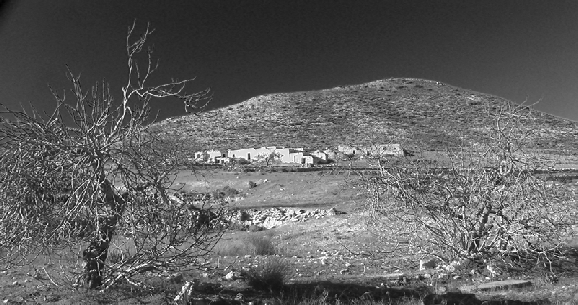 This cortijo near Fernán Pérez exemplfies the relationship between architecture and context. The siting of the buildings is on the least useful land. This is how even villages in northern European countries were set. Here it is the boundary between rough grazing hill slopes and land that was capable of being terraced for crops. Over a few years of neglect the fig trees have declined but indicate a valuable resource set alongside the shallow rambla where water would have been available to roots. The buildings face south east to catch morning sun but provide evening shade. 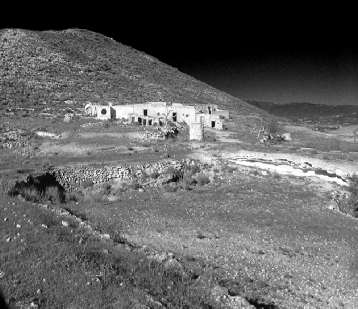 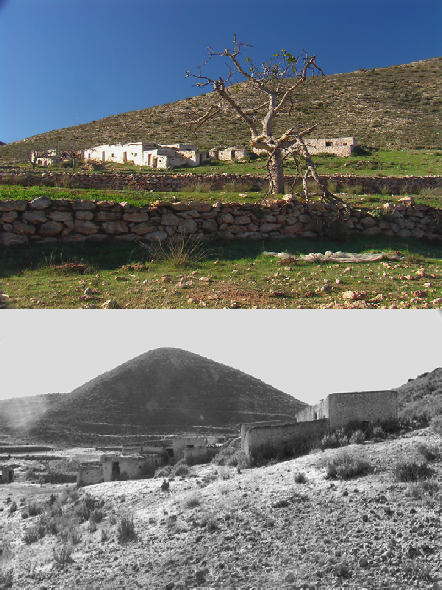 This is limestone geology, a fossil coral reef area that streams out behind the huge fossil ‘black smokers’ of Los Bornos. Though stony, given adequate lime this can be fertile with manual labour. It doesn’t suit modern machinery. These images reveal quite extensive cropping terraces conveniently arranged for access, utilising an irrigable zone. It is most probable that originally there were many more fig trees on field boundaries. The buildings sit organically as well as picturesquely within their surroundings, an Arabic sensibility derived from classical antiquity. Hillsides remain visibly over-grazed, slowly reverting to garrigue. This finca is set in a long wide valley with several others originally and at the head of the valley there was a common grazing, a cañada. A steep conical hill like that in the background here gives good grazing for mobile shepherding practices in Spain.