Cabo de Gata’s ecosystems are almost entirely human modified. In few very isolated places traces exist of an indigenous temperate rainforest which once covered the mountains. Even prior to intense Morisco farming, extensive supporting a large population, scrub had been cleared for grazing and burning charcoal, a commodity sold for city fires and early industry. We find no relict evidence of charcoal burners though like the circles on Mallorca similar to eras here. With more rainfall these alkaline soils would be capable of rich vegetation. A sea promontery sheltered from the north should induce rain were it not for the rainshadow of the massifs Gador and Nevada exacerbated by denudation. Erstwhile subsistence farming gave way to plastic greenhouses and tourism, both taking advantage of what might otherwise be considered defects. In the process ground water levels have declined drastically. Only the pitta forests & eucalyptus introduced by humans otherwise rise above scrub.

The mountains reveal evidence of human activity, of excavation, denudation and cultivation. Excavations are in such inaccessible places that it seems there must have been precious material but it was mostly granite setts for urban paving. Mules carried the stone down tracks to boats anchored in adjacent coves and bays, like Playazo de Rodalquilar, whence it was shipped to a mineral railway at Agua Amarga or via sea to maritime cities. Rodalquilar is more famous for its abortive goldrush. Only one person, it is said, made a fortune there despite the destruction of whole mountainsides. But lead, tin, copper, antimony and iron were extracted in sundry places and lime kilns around Agua Amarga, a popular tourist resort once the coastal terminus of a mineral railway to iron smelting towers in the Sierra de Alhamilla, indicate iron smelting. Morisco terraced fields climb the highest peaks of Los Frailes. 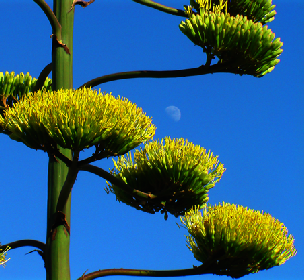 Human ecology in the district of Níjar has condensed into two categories: industrial agriculture & tourism. Due to its Natural Park status industrial agriculture within the park zone is limited to some extent but not entirely. The limits have of late seemed rather flexible. There are small zones of mineral extraction, mainly bentonite, a white volcanic clay similar to kaolin.

San José, the most popular tourist village is named after its fort. This fort was demolished during the Franco regime to make way for a Guardia Civil depot. Like most of the small villages of the cape it had been depopulated by piracy until the building of the forts. That depopulation before and through the 17th century left neglected and unproductive land. The fort of San Ramón adjoining Playazo beach guarded access to a fertile plain. Further inland near it an older Morisco fort probably guarded access to the sea rather than from it. Spanish coastal forts were by royal decree named after Christian saints and enabled a resumption of agriculture and fishing. Fish farming is practised from Isleta del Moro

The fort of San Ramón

At present this is a sketchy and rather unsystematic collage.

The World as we know it?
Our view of this complex organism earth is limited and anthropocentric. We create stories attempting to explain processes we believe we know and these we call ‘science’. Primitive humankind encapsulated such knowledge within myths and perhaps believed that those allegorical structures were totality, often fought wars over them (then as now). This tendency remains at a populist level; what we call science is more open to exploration and discovery though limits to that are revealed by current affairs related to concepts of global warming in which information falls victim to similar manipulations, creating or defending political structures. Myths rigidified, a tendency also of most religions. But the world as we know it is not the world as it is. The world as we know it is an image constrained by our sensory spectrum as much as our knowledge, shifting and framed by our collective imagination. It increases in complexity over time. Consequently the science of ecology, whose stated purpose is to understand relationships between numerous seemingly diverse earth processes, cannot be complete. We might ask how a dolphin might view these relationships (and our apparent determination to
exterminate its kind)? What we ‘know’ is affective only in human terms and instincts and unfixed. Even the concept ‘Gaia’ does not encompass the world as it is. That too is a framed and contained imaginative concept. If we ourselves are ultimately destroyed in some cataclysm, self induced or as a result of cosmic process or disease, the world merely changes mode. Similarly were earth to be shattered by cosmic collisions, which is after all how it was probably created, the result would be recycling of matter and energy and perhaps a renewal of life forms. This of course neither excuses nor ignores our apparently destructive influence for millennia past. But there are many other processes that we view as destructive and random from humanity’s viewpoint that from another vantage might be considered just evolutionary change. It might prove unfortunate
though that despite our increasing knowledge in this post-modern culture we nevertheless continue to pursue courses that possibly lead to humanity’s ultimate self destruction. So my ecology sketches on these pages are just that, a collage of sketches from a personal philosophical viewpoint. These pages are prone to much editing and growth!

Outline Ecological Zones:
Despite its self-contained anomalous geology diverse ecosystems evolved from the basic andesite mass.
• granite peaks and walls
• submarine alluvia
• submarine organic structures (reefs)
• large fossil dunes
• geological shoreline shell & sandbanks
• outflow alluvial plains
• alluvial deposits from large fresh/brackish lakes
• relict sandstone layers
Interrelationships between these have such complex timescales as to be almost incomprehensible but the variety of habitat arising from it engenders intricate wildlife and earlier also cultivation.
Over the course of time we hope to map at least some of this.

Most usable water here arrives deep underground from the Sierra Nevada. Years with little snowfall mean less water in wells and ramblas. It travels along fissures in the volcanic mass after travelling along the wide valley between Sierras Nevada and Alhamilla that runs as far as Granada.

Snowstorm s on Nevada send water underground to The Cape 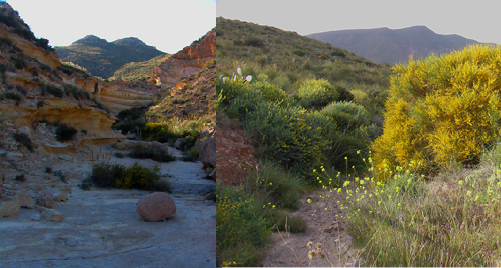 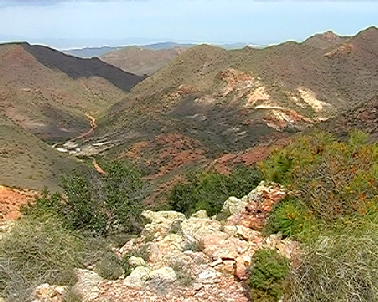 This image shows a part of the small remnants of the original climax vegetation at the western extreme, dwarf pines, carob and cistus ladanifer. Rather reminiscent of Hoy in Orkney, this little relic is centred in an area most affected by humidity from Alboran (on the background horizon).

There is an excellent guide to the ecology of the Cabo de Gata in Spanish, which gives scientific information about climatology, ecosystems and some of the wildlife that constitutes them.

This gives lists of endemic species of flora and fauna but is obviously not able to be exhaustive in 170 small pages.

NOTE: There is an important exception to the industrialised agriculture within the park. This is the large property of the original landowners, Montoya Diaz. Owning still 3000 Ha it is carefully farmed, centred on Campillos de los Genoveses with herds of rare breed sheep and goats. Subject to controlled grazing this results visibly in exemplary land conservation, quite exceptional.

If you would like to correct errors in naming of flora and fauna or geology, make other pertinent suggestions , if you might wish to use higher definition copies of some of the images, or would like to discuss issues connected with conservation your comments and requests would be welcome via this form?  I shall do my best to respond but cannot guarantee to do so!