What kind of garden can one create in a windy desert? Here the soil itself is potentially fertile enough though the original farm was subsistence level and labour intensive; its new owner attempted an oasis, a lovely romantic dream that failed to mature. Fascination with cacti and succulents led to the present garden which, throughout the year, comes alive with colour. Only in the torrid months of July and August do these plants cave in and live on reserves, cowering within themselves. Were subsurface water sufficient then even during this part of the year a succession of bold form and vibrant colour could be maintained. Not only have these plants strong characteristic forms but their flowers are emotively colourful,fragrant & as vibrant as jungle flora. 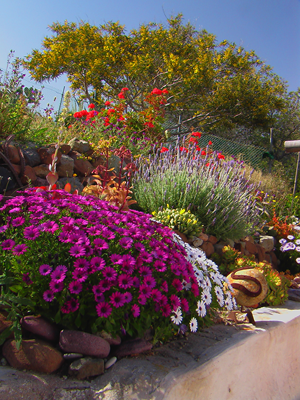 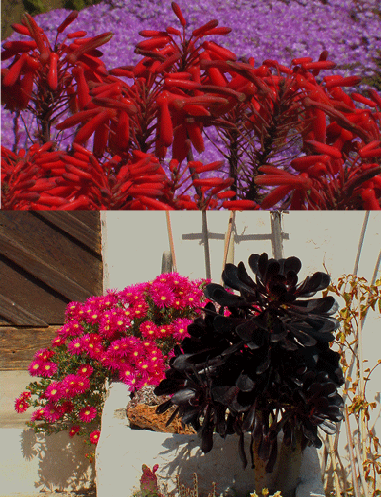 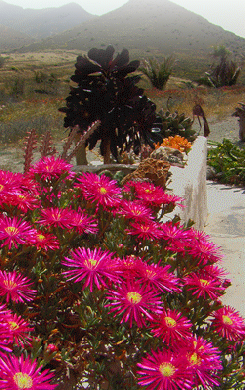 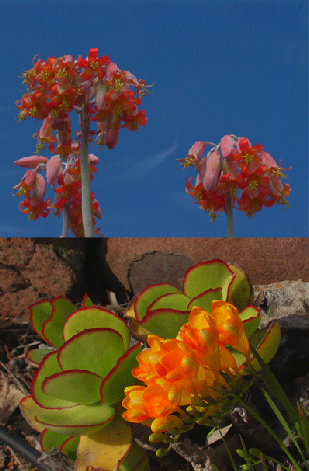 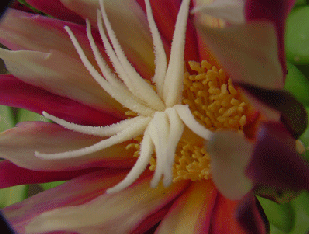 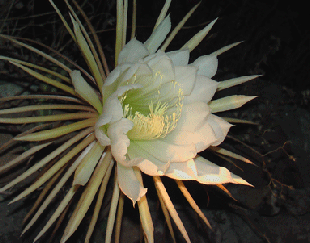 Top right: a vivid mesembryanthem um creates a backdrop that heightens the scarlet flowers of fireplant.

Right below: a small trough contains a succession of cacti & succulents in contrasting colours through the year set against limed walls and weathered wood.

Left below: subtly gradated but vivid umbrellas of pachyveria enhance the intensity of sky;

Canary Island plants can survive here due to the higher humidity but need much attention to prosper. 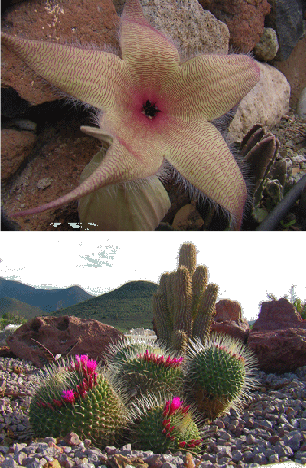 Colour gains theatricality against intense clear skies or when it spills out of the confines of the patios to  become appreciated against a setting of tawny hillsides under a heat haze. Harmonies of form and colour stand in vivid relief against normally sienna coloured rocks; the textures of plants amongst granular or jagged surfaces of rocks are enjoyed to the advantage of both, both in the garden and in the surrounding wildernesses (see the wild flower pages). 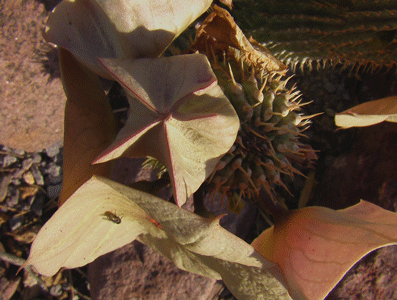 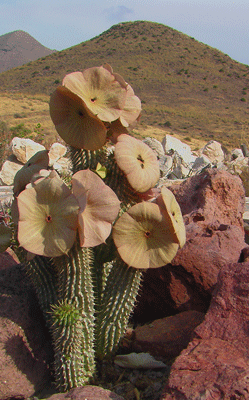 Trial and error is the only key to survival. Sometimes plants thrive and prove uncomfortable not only in a tactile sense, as this Kalahari cactus or themselves evince discomfort. This Kalahari cactus is pollinated by flies and when in flower, which it is for long periods, they swarm around. Of course it is really a disguised espionage system of satellite aerials! Unfortunately it doesn’t connect to mobile phone networks and so overcome the dreadful failures of Telefonica’s exploits in the area. The relationship these plants have with rocks is a source of enduring visual pleasure. 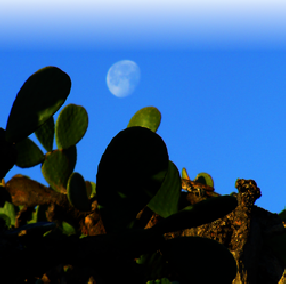 Moonset among chumbos and the skin-like waxen surface of new growth emerging from old woody cactus trunks attract the eye to form, pattern and texture in a manner quite differently from the perceived visual fragility of most deciduous plants. It induces an illusion of cosmic strength and endurance whereas deciduous forms suggest always evanescence and constant metamorphosis.

Skilful placing of visual simile generates visual excitement under strong sunlight (perhaps it might have more impact if isolated visually from the eucalyptus though this is due to a two dimensional image). But the plant appears to emerge organically from pitted volcanic rock and in some way sublimate its form. ▼.

To avoid intense full sun many succulent flowers are crepuscular, emerging with perfume to attract pollinating moths into their fragile textures. Seeking daytime insects is a risky strategy in hot arid climates. Some delude flies into illusory egg laying sites, imitating animal anatomies and related perfumes. Ants and flies cluster around the pistil in its orifice & the flower, protected from searing heat by a hirsuit surface, survives several days. All look their best in stony textures to emphasise form and colour and provide insolation by reflecting light from roots. Plants emphasise their presence by smell or visual stimulus. 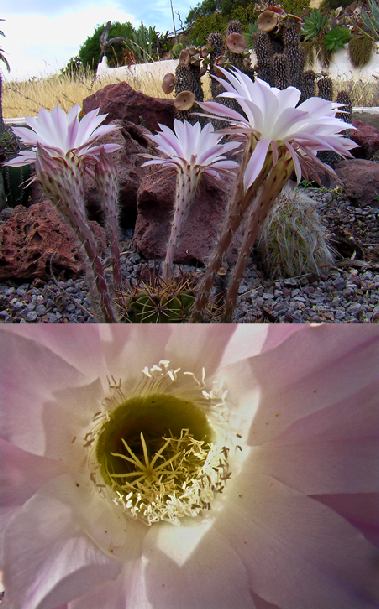 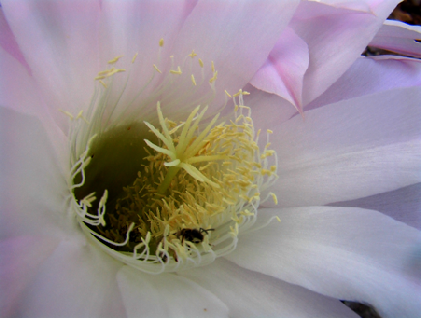 Many cacti attract specific insect pollinators. This mamillaria opens early in the morning and is pollinated by very small bees or wasps (not checked yet!). They survive until around midday. Above you can see the pollinators treading the stamen rug. 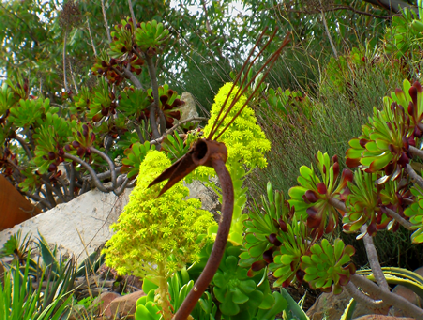 Minimal use of garden ornament in the conventional sense and maximum use of carefully chosen stones give greater emphasis to both. Even in this arid climate iron rusts, creating interesting colour and texture similes.

◄ BACK TO MAIN PAGE 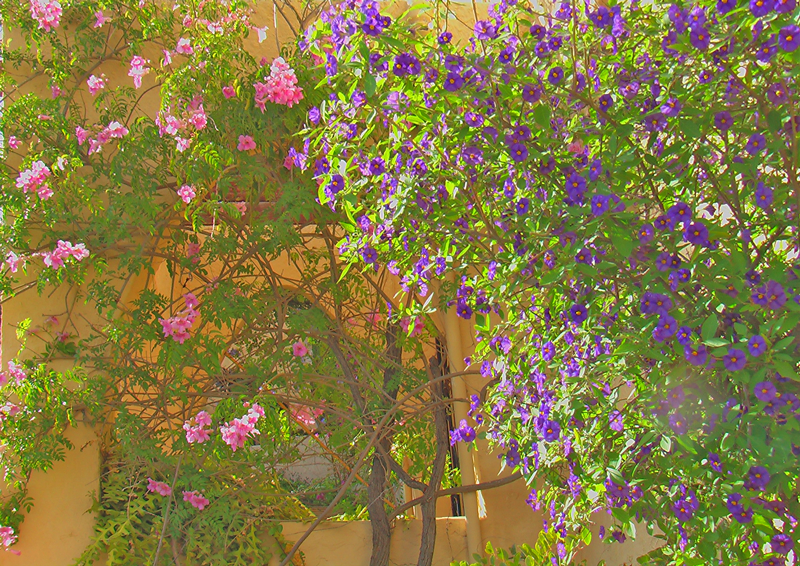 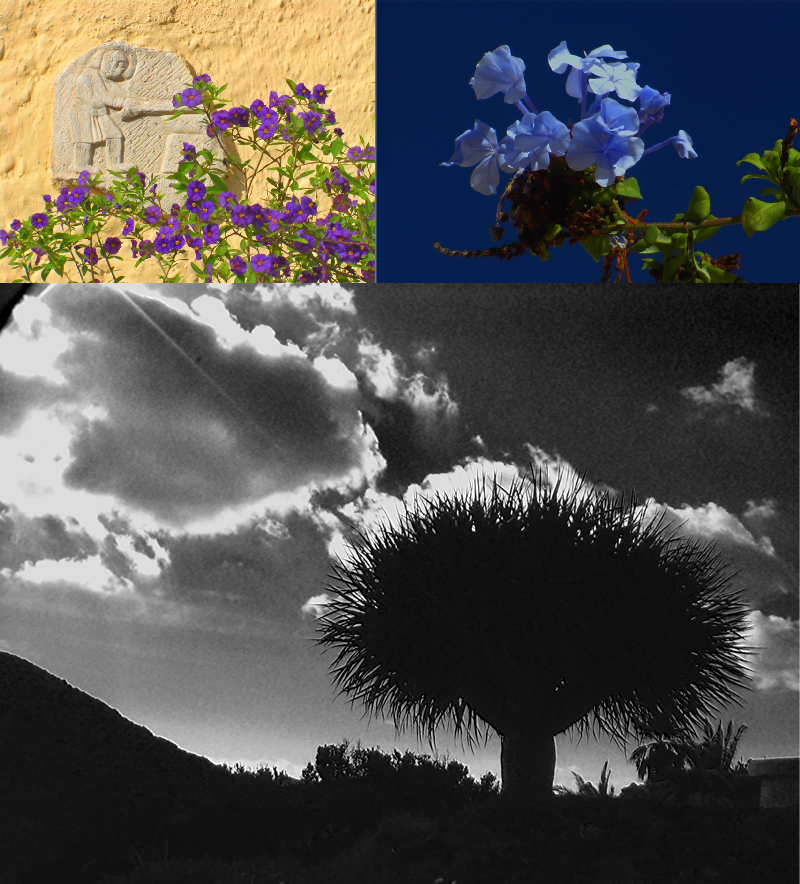