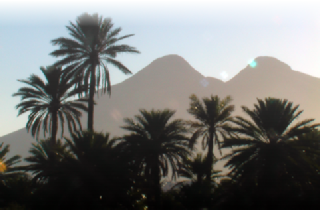 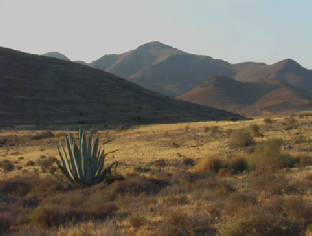 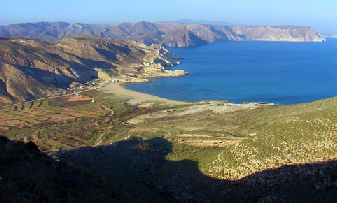 Small in area, strong in gradient, The Cape offers frequent scenic changes over short distances, ideal for walkers. Twin volcanoes, Los Frailes dominate a morphology of craggy crater walls, volcanic debris mounds, ramblas, barrancas and old field terraces. This engenders a theatrical spatial experience of sometimes vivid colour and gradient contrasts. On the coastline small intimate coves alternate with sandy bays of clear water. It is photogenic and in this respect you should visit www.jeannechevalier.com  Jeanne, a highly respected professional photographer with an international reputation, has been creating and publishing her enjoyable and poetic images of the area for a long time.
Some old Morisco cortijos and their reverting terraced fields remain in use. More in our ECOLOGY pages.
Los Frailes in autumn after summer’s drought
Campillos de los Genoveses in autumn
Campos de Rodalquilar & Playazo in midwinter

We have divided scenery into zones for no other reason than our own convenience. This page then, is a brief introduction 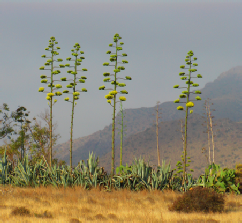 Bronze colours this scenery for most of the year with outbursts of greens and vivid primary hues twice annually. 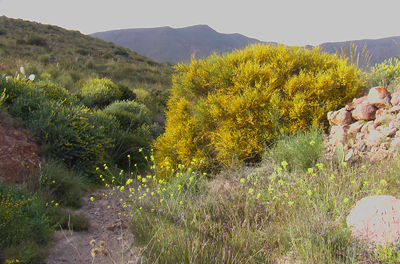 Ramblas, (dry river beds were once symbolic features of sufi gardens) run with water only in severe rainstorms but underground they supply many plants for much of the year. In their shelter and over old fields on their brink butterflies, moths and dragonflies create a vivid hubbub of activity with lizards and snakes in their sandy bottoms.

Alluvial areas have accumulated over millenia, some of them when this was still submarine. Two forms of gully cut through them: barrancas carry surface water from flash floods and ramblas carry longer periods of water underground. The result is intricate variety for the walker. 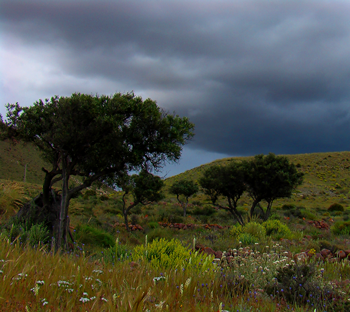 Many imagine that a semi desert might have perpetual sunshine. After all, aridity is a lack of rain. But there are long periods when clouds darken these mountains with not a drop falling to the ground. When rain does fall it brings an energy that seems far more powerful than in a northern temperate ecology. Reverted grains, weeds of cultivation, maquis, all surge into almost instant life whose perfumes fill the atmosphere in rich variety. Left: the remnants of olive and carob provide shelter for goatherds. 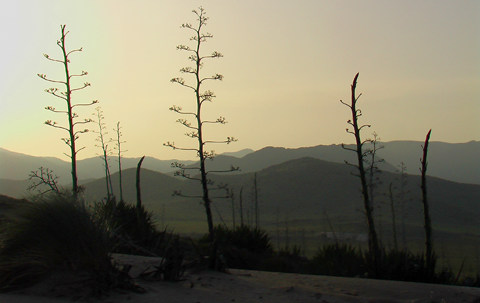 Wide fertile plains in the area called Los Genoveses with one of the most popular and beautiful beaches in the whole of the cape result from a large submarine caldera filled with sediments. Low dunes between the sea and the plain are home to large green ghekkos, becoming scarce with increasing human intrusion. Their tracks in the sand recall ancient fantasies of dragons. Through drifting sand agaves rise tumescent every vernal spring, thrusting amongst the towering remnants of the previous year’s dead. Out of season - and only out of season - this is a place of tranquility. From some vantages though one can imagine the huge volcanic cone it might once have been. Here the Mexican fig (chumbo-chumbo) is cultivated as goat fodder and grain is sown, a pleasing human presence among the crags. 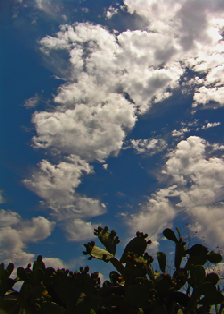 Who could fail to love such land deeply? Developers and politicians with an eye to big revenues? Summer holidaymakers perhaps? In all its moods a sublime sense of stability prevails. Its hills and valleys partition space to human scale yet anticipate a wider sense of place beyond skylines, engendering profound comfort and contentment.

www.andalucia.com/environment has much information including suggested rambles in the locality.

Playazo de Rodalquilar is rightly popular. Its relatively shallow water and a section near the shore protected by low underwater reefs make all season swimming possible and panoramas reach back to Mesa Roldan along a steep coastline interspersed with attractive coves or calas. This is the opposite of the scene from Mesa Roldan▼