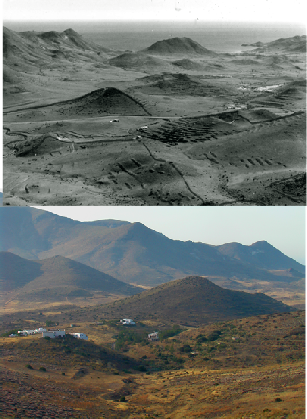 El Cortijo de la Fuentecilla is a private residence and nothing in this website is intended to solicit tourism of any kind. Morisco or Múdejar in origin but much altered, at the time it was bought by a Russo-German emigré in the late 1960’s it was owned by a family of brothers. They had inherited it from the housekeeper of its previous owner. A bachelor doctor he had bought it from José Montoya, a wealthy anglophile eccentric who once owned the whole of the Cabo de Gata coast & whose family still owns much. The original core of salon and bedroom was once connected to animal pens for donkeys, goats, pigs and chickens. Farmers continued the Arabic tradition of living in close proximity to livestock in much the same way as earlier medieval northern Europeans had. All the land was terraced and cultivated, a bare utilitarian scenery of subsistence farming, though the naming of some topography suggests a richer past. One mountain slope is called ‘The hill of lemons’. With great enthusiasm but lacking essential land management skills the new owner set about creating his ideal oasis paradise. At that time water seemed abundant. He planted hundreds of fruit trees, eucalyptus shelter belts and a pine grove but the aquifer dwindled away and he fell ill and died. Presently a struggle exists between conserving water and nursing the relics of this ‘paradise’. 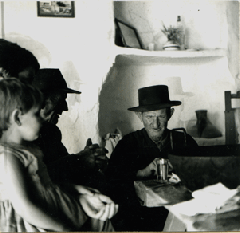 The family from whom it was bought 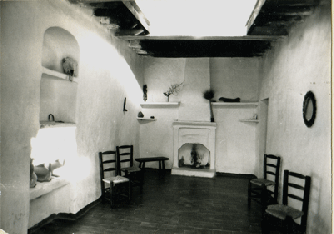 A traditional Andalus salon but the hearth is not!

A typical Andalus extended family farmed the land outlined in the top image above, tenant peasants without machinery using donkey and mule. They kept a few sheep, pigs, goats and chickens, mostly grew grains, chickpeas and vegetables. They lived in two rooms that opened directly into animal stalls, a harsh existence within a nationalist regime that penalised Andalucía economically for political dissent during a bitter civil war. 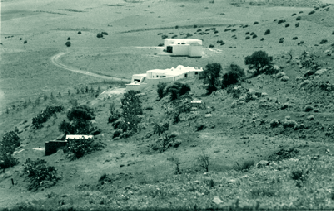 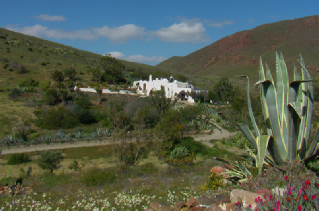 Before the days of Natural Park status parcels of land were developed with modest villas, many since enlarged and assumed the title ‘cortijo’ as desirable. There are two real cortijos (Andalus farms) in this valley, ‘La Fuentecilla’ and ‘El Capitano’. El Capitano is derelict. Its finca has become home for apiaries. Increasing trespass over the land by vehicles that do not keep to established tracks is increasing erosion rapidly and destroys some of the more interesting flora that colonises open ground; it gets crushed to extinction (see Conservation). 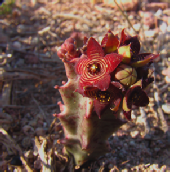 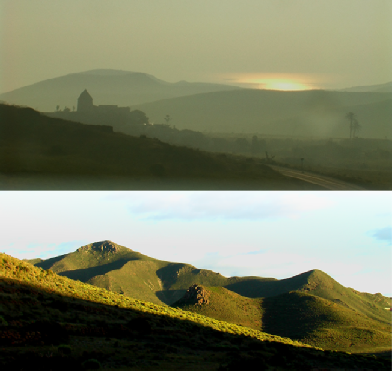 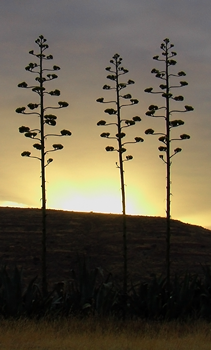 One of the more fragile and interesting ‘African’ plant colonisers that get destroyed under tyres, Caralluma europea.

Tranquility here has many ways. Scenery induces its own sense of security within ranges of gentle valleys and hills. Enclosing mountains, atmospheres of light, air and humidity create a seeming infinitely variable sequence of change. Also possibly there exists a geophysical energy which induces positive feel-good ionisation.

Breakfast on the terrace watching dawn transform itself through sunrise, anticipating the daily walk through the hills, makes the best possible start to any day. 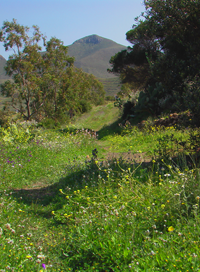 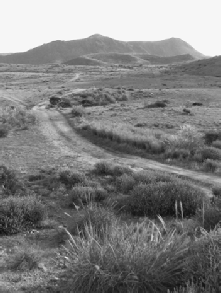 Far left: at certain times of the year one could almost believe oneself in the English Lake District! Centre left: an old goat track now gets pounded by 4 x 4 vehicles that use it to wander all over. Above: listening ears of the cosmos! 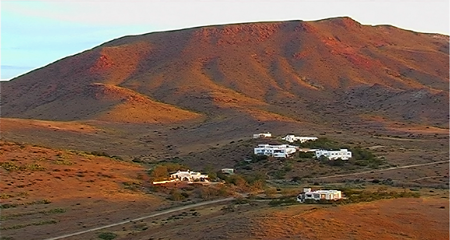 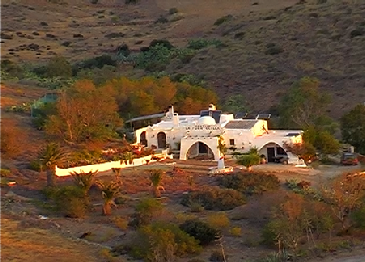 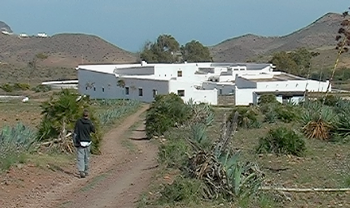 The Montoya-Diaz cortijo complex in Genoveses

Cortijo La Fuentecilla is small. Generally the size of farms was dictated by the capability of the finca to support people. Most in this area have been much modified by incomers, Fuentecilla included. That belonging to the original Montoya-Diaz landowners (left above) is comparatively enormous, almost Frontera size. This was also the case with Cortijo del Fraile (to be included in due course). 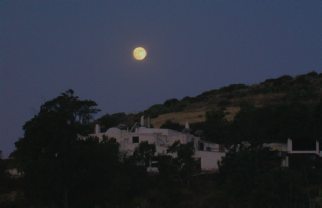 People familiar with Morocco comment that Fuentecilla looks  like farms there. Most of what you see in this slightly romantic image is modern, since 1968. In Rodal-quilar there is a farm operated by Moroccans. It does look similar but more ‘used’! The paraphernalia here of modern living - solar water heating & electricity, clutter its silhouette.

Fuentecilla  sits comfortably on one of the many hydrothermal mounds formed during collapse of the large caldera, later penetrated by the two resurgent volcanoes of El Fraile